Pat Kling, a two-time Equinox champion and former record-holder, died of cancer Nov. 19 in Spokane, Wash. She was 69.

Below is a piece written by Matias Saari about the special relationship Kling had with the Equinox. 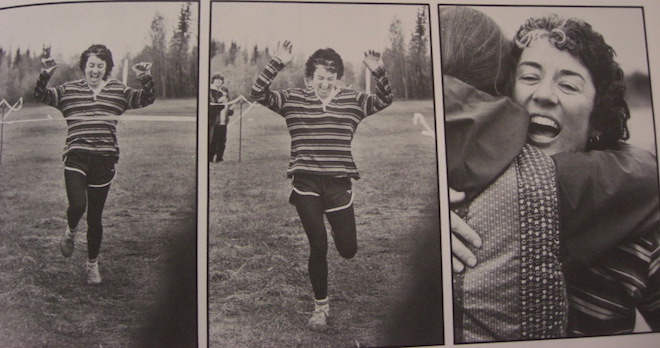 Eye of the Tiger

Inspired by Rocky Balboa, Pat Kling became one of the first Equinox diehards.

From 1977 through 1994, Kling only missed one race and eventually collected 18 marathon patches.

That may never have happened had she not watched the movie “Rocky” shortly after its release in late 1976. Kling was so moved by a scene showing Sylvester Stallone running through Philadelphia’s Italian marketplace that at age 32 she began running.

For Kling’s first Equinox in 1977, she hiked most of it, finishing in 5 hours, 34 minutes. The next year, having actually trained, Kling was convinced she could win. Though she was third in 4:17, the competitive seed was planted.

Upon shattering the record that year her glee was documented in a wonderful series of photos published in Denali, UAF’s yearbook. In the first, Kling, wearing her lucky second-hand striped shirt, laughs as the finish-line tape touches her torso; in the second, the tape breaks and she raises her arms above her head; in the third, Kling, open-mouthed and smiling widely, hugs friend Fran O’Donnell.

Kling, with a solid build and short brown hair, lacked speed but had good endurance and excellent downhill running skills.

“I was never very fast but I could kind of a pick a pace and hold on to it,” she said.

She also trained hard, averaging about 60 miles a week. Mostly she ran solo, either on Fort Wainwright or at the Birch Hill ski trails near her home.

Kling said she was initially hired as a teacher at Barnette Middle School so she could also direct their new running and skiing programs. She eagerly took the job even though she was a novice skier.

Kling’s focus on training and competition lessened upon adopting the first of two children in 1986, though she stayed enthusiastic about running. During the 1994 Equinox — when she ran the second leg of the relay — Kling played “Chariots of Fire” at full volume in her Subaru station wagon parked atop Ester Dome to inspire runners.

She left Fairbanks in 2000, moving first to her college town of Spokane, Wash., then to Grant Pass, Ore., and in 2011 back to Spokane, where she was reunited with good friends with Bob and Claire Murphy.

“One of my fondest memories is running the Equinox,” Kling said. “I just love those trails.”