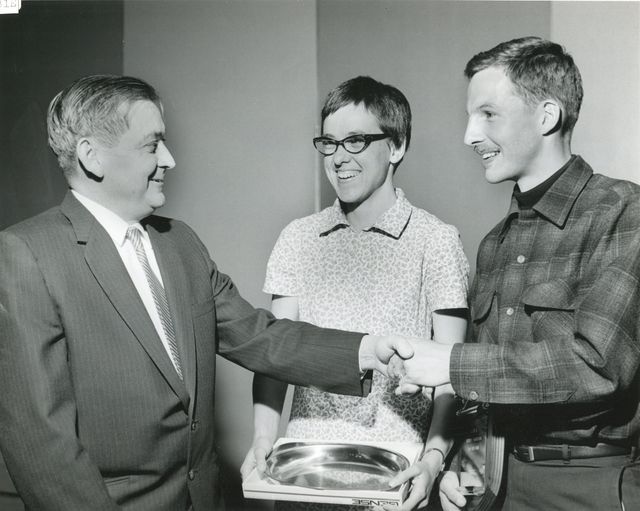 We are saddened to report that Gail Bakken-Johnson, one of the founders of the Equinox Marathon, died Saturday in Anchorage. She was 74.

Bakken-Johnson was instrumental in creating the original trail in 1963 with her then boyfriend, Nat Goodhue, and UAF ski coach Jim Mahaffey.

Bakken-Johnson won the inaugural women’s race and completed six full Equinox marathons and the relay twice. She last attended the Equinox in 2010, when she received a special “Founders’ Award.”

The Equinox was like a holiday for Bakken-Johnson, who was diagnosed with plasma cell leukemia in 2014.

“You have Thanksgiving and Christmas and Easter and the Fourth of July,” Bakken said. “And the Equinox.”

Equinox Marathon Inducted into the Alaska Sports Hall of Fame

Virtually everyone in Fairbanks knows how integral the Equinox Marathon is to the community there. Now the Equinox has received statewide recognition after being inducted into the Alaska Sports Hall of Fame on Feb. 26 at the Anchorage Museum.

The Equinox, which celebrated its 50th running in 2012, was the lone 2013 event inducted at the well-attended ceremony.

A two-minute video produced by KTUU television about the Equinox was also shown. It included recent and archival race footage and photos, plus interviews with Bainbridge and Saari.

The Equinox plaque is displayed at the Alaska Sports Hall of Fame gallery at the Ted Stevens Anchorage International Airport. It features the Equinox patch and a black-and-white photo of runners — including Craig Gardner, Bob Baker, and Jim Bouchard — charging up Beluga Hill at the start of the 1979 race.

Other Fairbanks-connected Hall of Famers include Susan Butcher, Lance Mackey, and Buck Nystrom (who was inducted Tuesday) as individuals; the Midnight Sun Baseball Classic as an event; and UAF’s Top of the World Classic basketball win in 2002 as a moment.

Runners: Be Considerate of Private Property on Ester Dome

You may or may not know that when you reach the first summit on Ester Dome, “Ullrhavn Summit,” the land on either side of the road is private property.

The upper 1/3 of the Chute is located on Alaska Ski Corporation property, as is a segment of the Out-and-Back between Ullrhavn Summit and the Observatory Summit, where the trail leaves Ester Dome Road to the north and heads for the Nugget Mine Road.

If you are running on these sections, please be aware that this is private property, and treat the property with respect. Our ability to continue to utilize these trail segments, including the legendary Chute, depends upon the willingness of the property owners to let us use the land. And that depends upon maintaining good relations with the owners.

So, if you are up on Ester Dome, and you run into one of the owners of the private property, please recognize their ownership of the land you cross while training, AND please thank them for helping to make the Equinox such a great community event.