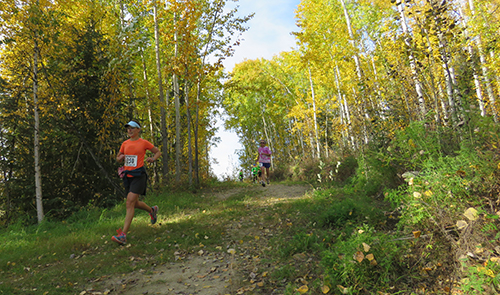 Many people run the marathon without a support crew out on the course, but it can be a fun way to get more people involved with your race. And it’s always nice to have a secure way to get supply updates or drop off a soggy raincoat when the sun finally breaks through!

If you have a support crew helping you out, think long and hard about THEIR strategy. Keep in mind that traffic on many sections of the course is heavy, and the logistics of getting to and from the summit of Ester Dome are particularly difficult.

There are usually in the neighborhood of 800-900 competitors on the course, and many times that number as support crews out there trying to support the racers.

That means a HUGE MESS for traffic. If your crew is going to try to follow the race in a car, they could be in for a hard time, especially at the top of Miller Hill, at the Sheep Creek RR crossing, on Ester Dome Road, and on Henderson and St. Patrick Roads.

Those roads and locations will be chock-a-block full of cars, and that means the cars will be moving very slowly, if at all. Crews traveling in cars will have a very difficult time getting to the locations where they “promised” they would be.

The best strategy if you are trying to support racers in multiple locations is to use a bike, and to NOT try to provide support at a high number of locations. If you travel by bike you can move faster than a runner at almost any point on the course, so you should be able to ride your bike around, stay out of a car, and still provide support at several locations.

Remember that NO CARS are allowed above the intersection of Henderson Road and Ester Dome Road. Remember, too, that if you plan to drive down Henderson Road in a rush, you are likely to meet someone who has made the ill-advised decision to drive UP Henderson Road against all the traffic. That really brings things to a halt.

So, take the time to make a good support plan. A word to the wise: USE A BIKE, NOT A CAR.